The main active structure element for the Technology Layer is the node. This element is used to model structural entities in this layer which as the following characteristics:

A node is active processing element that is defined as a computational resource upon which artifacts may be stored or deployed for execution.

In the ArchiMate diagram below, you see an Application Server node, which consists of a Blade device and Java EE-based application server system software.

The name of a node should preferably be a noun.

A device is a specialization of a node that represents a physical resource with processing capability.  It is typically used to model hardware systems such as mainframes, PCs, or routers.

A device is defined as a hardware resource upon which artifacts may be stored or deployed for execution and has the following characteristics:

The ArchiMate Diagram below shows an example of a number of servers, modeled as devices, interconnected through a local area network (LAN). 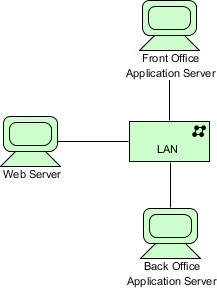 System software represents a software environment for specific types of components and objects that are deployed on it in the form of artifacts, which

System software is a specialization of a node that is used to model the software environment in which artifacts run which has the following characteristics:

In the ArchiMate Diagram below, we see a mainframe device that deploys two system software environments: a customer transaction server and a database management system (DBMS).

A technology interface is defined as a point of access where technology services offered by a node can be accessed by other nodes and application components.

An technology interface specifies how the technology services of a node can be accessed by other nodes provided by the interface and it has the following characteristics:

In the model below, we see a client technology interface exposed, which is part of the client/server system software.

The name of a technology interface should preferably be a noun.

A network is defined as a communication medium between two or more devices.

A network represents the physical communication infrastructure and it has the following characteristics:

In the model below, a 100 Mb/s LAN network connects a mainframe and PC device.

A communication path is defined as a link between two or more nodes, through which these nodes can exchange data.

In the ArchiMate Diagram below, we see a communication path “message queuing” between an Application Server and a Client.